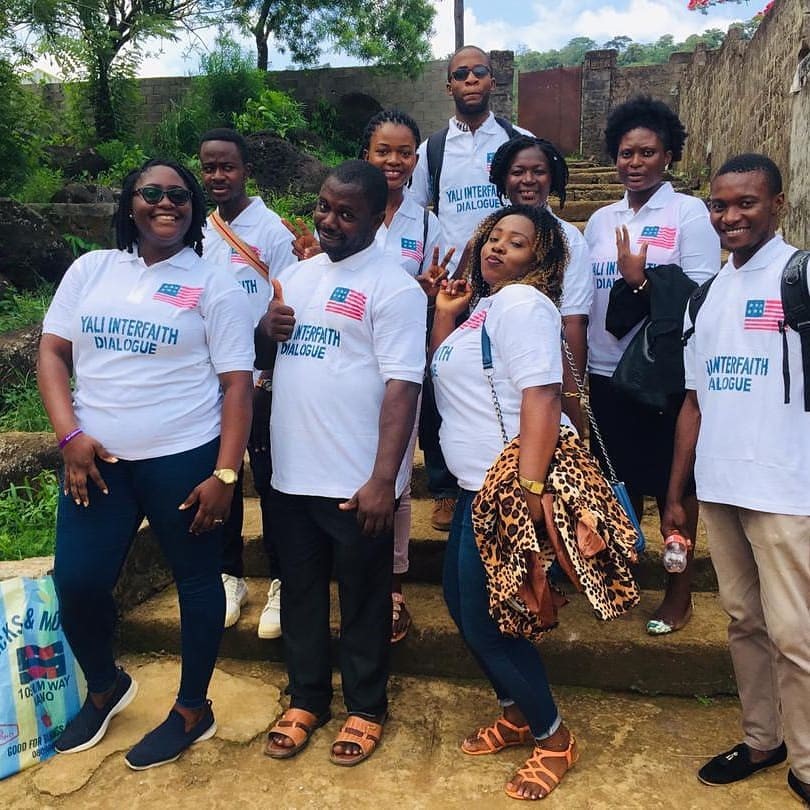 In line with the US State Department’s commitment continually support and promote the community interventions of alumni of the Mandela Washington Fellowship for Young African Leaders, the US Embassy in Yaoundé funded a series of activities aimed at:

The youth interfaith dialogues consist of roundtable or open group discussions between leaders and believers of different religions and faiths. These discussions are aimed at promoting peace, understanding and decreasing ethnic, gender and religious factions.

On Friday 19, 2019 a team of four YALI fellows organised a one-day interfaith dialogue At the Women Empowerment Centre in Ngaoundere, Adamoua Region. The team consisted of 2015 Mandela Washington Fellow Mirabel Ngong, two YALI Regional Centre Fellows Nganjo Emmanuel, Paul Lola and one YALI network member Vera Berinyuy. The Objective was to promote peace and understanding among 40 youth leaders in Ngaoundere and engage them in the peace building process. The fellows moderated an open group discussion with 26 youth leaders from Muslim and Christian denominations actively leading in the University of Ngaoundere, community groups, mosques, and church groups.

From the 21st to the 22nd of May 2019, a group of Nine YALI RLC Alumni organised an interfaith dialogue at the UNICS Secondary School in Limbe and at the Kulu Memorial College Down Beach respectively. The team consisted of ;Ngang Ernest (RLC), Ndolo Miranda (RLC), Phil Collins Tembeng (RLC), Eli-anne Anwie (RLC). The overall objective was to bridge the differences in opinions related to the crises and encourage living in harmony and mutual respect, and finally promoting peace and understanding of divergent points of view in southwest Region.

On the 25th of April 2019, three YALI alumni of both the Mandela Washington Fellowship and the YALI Regional Leadership Centre organised an interfaith dialogue at the Government Bilingual High School of Maroua. The team was made up of; Moussa Minda Virginie épse Danwe (Public Management-Bridgewater state University), Bainamndi Daliwa Joseph (Business and Entrepreneurship-Purdue University), Triumphant Thulang (Yali - Dakar) and Micheal Adjali (YALI network). The project targeted students in the final two years of high school and the objective was to organize a forum discussion to promote peace and understanding among students of the GBHS of Maroua. The project took place in a sorrowful atmosphere occasioned by the death of a student and an armed confrontation between two groups of students. The first session of the day was byt the team leader – Minda Virginie, who sought to channel the negative energy and convert to positive energy on which the students could benefit from the sessions of the day.

The youth interfaith dialogue activities were a remarkable success in all the regions where they were implemented. A total of over 250 youths were directly positively impacted though this project. Five YALI clubs were created in 4 different communities and it is our hope that these youths will become advocates for peace and will promote dialogue and peaceful resolution of conflicts in their communities.

The participants greatly appreciated the interfaith dialogues and several of them requested that such initiatives be multiplied across the country to reach an even greater number of youths.